Effectiveness of subsurface drainage in enhancing the slope stability

Slope instability, triggered by excessive rainfall, is one of the common geo –hazards that geotechnical engineers are challenged with in tropical countries such as Sri Lanka. Typically, these slope failures are initiated in colluvial layers derived from former landslides or planes of low shear strength in differently weathered zones in the thick soil overburdens of residual soils. Many such landslides are in the central highlands of Sri Lanka. With the high intensity rainfalls occurring due to climate change effects in the recent past, the number of landslide prone sites are on the increase (Figure 1). 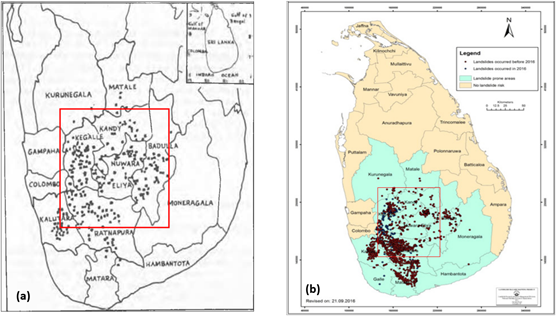 Because of interchanging wet and dry climatic conditions, hill slopes are subjected to cyclic wetting and drying phenomena. Progressing wetting fronts during infiltration events, deplete the prevailing suction profiles of the slope thus diminish the additional shear capacity of the soil. Infiltration also results in perched water table condition and rise of ground water table. Due to these mechanisms, shallow slip surfaces are initiated at the interfaces of differently weathered strata or within the weak colluvium materials. Complex geological formations associated with the slope such as relict joints aggravate the situation further. The WatawalaLandslide in 1992, Aranayaka Landslide in 2016 and Norwood Landslide in 2019 are some major events occurred in Sri Lanka following prolonged rainfall (Figure 2).

Badulusirigama Landslide was another example of pre-existing landslide that can potentially get activated after heavy rainfall events. The width of the landslide is about 120 m, length is around 500 m, and the slip surface has been identified at a depth of around 10 – 15 m. A part of the landslide is situated within the premises of Uwa–Wellassa University (Figure 3).

Reactivation of such landslide leading to catastrophic events can be eliminated by taking appropriate remedial measures well in advance.  Improvement of surface and subsurface drainage is one of the most effective methods in preventing such catastrophes. It helps to lower the ground water table as well as to prevent near surface perched water table conditions, thus enhancing the slope stability. 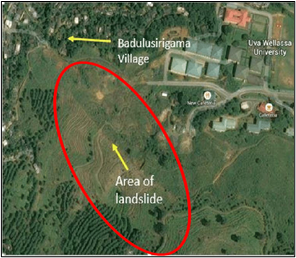 Figure 3 – Arial image of Badulusirigama Landslide, prior to the rectification

Noticeable movements in this landslide were observed after major rainfall events in 2007, 2011 and 2012. Consequently, this was identified as a high-risk landslide which needs immediate rectifications by the government of Sri Lanka. Under the “Landslide Disaster Protection Project of the National Road Network (LDPP), funded by the Government of Japan. The landslide was rectified with over 45 m long individual sub-horizontal drains that are arranged into a network of radial drainage groups (fan drains) at different elevations along the long sliding mass. This site is also well equipped with monitoring instruments and thus providing a great case history to further the understanding on contribution of surface and subsurface drains in mitigating landslides.

A numerical study was conducted to assess the effectiveness of the introduced subsurface drainage measures in enhancing the stability of the Badulusirigama Landslide. A 3D numerical model of the site was developed and calibrated using existing geotechnical investigation data that included borehole surveys, historical movement records, ground water records, rainfall data as well as site observations. (Figure 4). The numerical models were then used to predict the behaviour of the rectified landslide during different anticipated rainfall events.

The initial factor of safety computed for 3D slope model with the initially high ground water table conditions is 1.08. The slope reached maximum safety margins of 1.26 within a period of 18 days after construction of drains. Factor of safety value was maintained above 1.1 during an intense 5-day rainfall events of 400 mm. The ground water and pore water pressure fluctuations of the model confirmed that the drainage measures were functioning effectively during the simulated critical rainfall event. 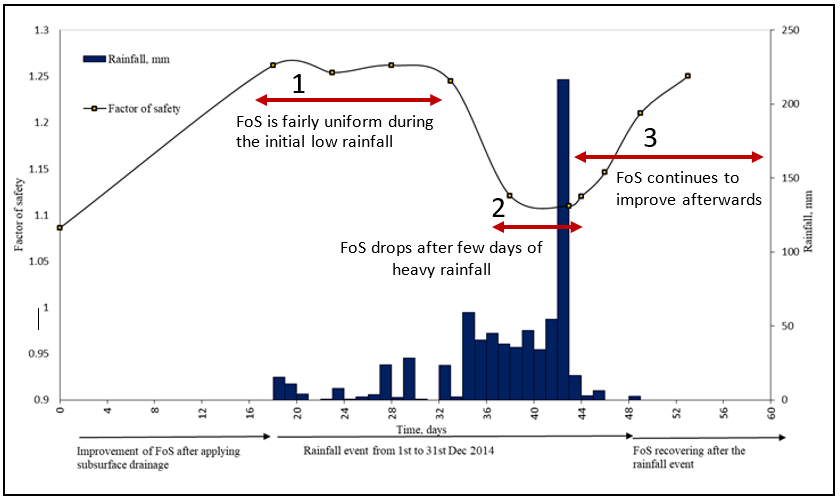 In addition, the study also included a 2D seepage analysis, slope stability assessment, comparison between 2D and 3D results and an analysis of effectiveness of vegetation. The comprehensive research is published as a master’s thesis and can be accessible via http://opac.lib.uom.lk/cgi-bin/koha/opac-detail.pl?biblionumber=179224&query_desc=au%3A%22Prof.%20S.A.S.%20Kulathilaka%22 .

Back to the newsletter front page