In this article, the author wishes to highlight some of his experiences which he encountered during the November 1978 cyclone, while working as an Irrigation Engineer (IE) attached to the Hydrology Branch of Irrigation Department, Sri Lanka.

That particular morning, Tilak Nikapitiya (IE) and I were called in by late Mr. Olsen Gunawardane, Senior Deputy Director (Research), to his office and we were asked to take a ‘Four Wheel Drive’ and proceed to Polonnaruwa immediately to meet A.D.S. Gunawardane (IE, Polonnaruwa) which we did. We were also expected to look after and rescue the Hydrological Field Unit and the Drilling Team of the Engineering Geology Division who had got marooned in the floodwaters while working in the Maduru Oya area. Just prior to leaving, Mr. Gunawardane showed us a photograph which appeared on the front page of Ceylon Daily News on that day. It was a camera shot taken off a helicopter, while travelling over Parakrama Samudra. That particular photo illustrated how the flood waves of Parakrama Samudra were overtopping its bund in many places. The Parakrama Samudra Reservoir was at full capacity, and the water level was quite close to the bund top. Owing to the reservoir’s long fetch of water-spread and the high wind velocities that were prevailing during the cyclone, the flood waves generated at the surface were overtopping the reservoir bund in many places.

The author recollects that he had never encountered such a drastic and serious situation during his entire 49 year career as an Irrigation Engineer/Hydrologist. It was an alarming and critical situation considering the safety of the large population living in Polonnaruwa suburbs located just downstream of Parakrama Samudra. 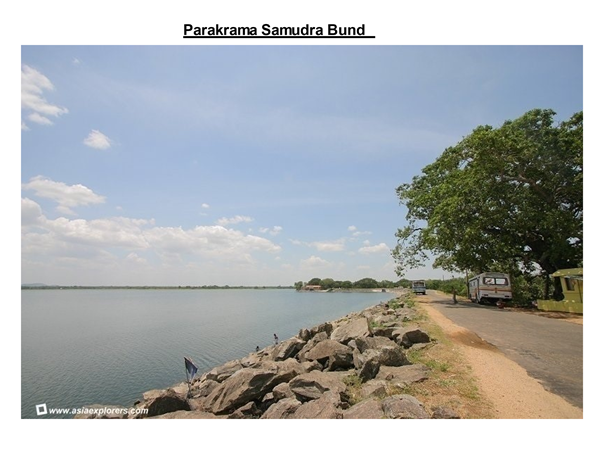 The Parakrama Samudra Reservoir was built by King Parakrama Bahu the Great, during his reign (1153-1186 AD) and it has a reservoir capacity of 98,000 acre-feet, feeding approximately 18,200 acres of paddy cultivation. This reservoir has a tank bund 52 feet high and 9 miles long. When the reservoir is full, the entire 9 mile long bund is under test. It is an earthen dam constructed by the ancient Sri Lankan dam builders about 1000 years ago.

If an earthen dam is to be built today, one has to follow the Principles of Soil Mechanics, and adhere to the criteria involved in selecting the particular type of soil to be used in construction and the identification of suitable borrow areas for them, and maintaining the required standards of compacting and consolidating the soils.  In this process, the mere ramming of soil would not be sufficient. It has to be done with the appropriate addition of water, so that the maximum soil density is achieved through the optimum soil-moisture content. In the present day, this is achieved by compacting the soil with sheep-foot rollers, and performing the ‘in-situ’ soil tests at site. But when the reservoir is on the verge of being over-topped by flood waves, it is in fact testing the soil mechanics and the compaction techniques adopted using cattle and elephants done in ancient times. In case, if there was a portion of earthen bund with poor quality, then it could fail and the dam could breach at that point. If this impending dam break happens at an unwanted and unexpected point on the dam, it could be disastrous and devastating, as so many civilians and property downstream of Parakrama Samudra would be seriously affected.

Knowing the imminent catastrophic danger, the Irrigation Engineer (IE) in charge of Polonnaruwa A.D.S Gunawardane, the Government Agent (GA) Polonnaruwa Austin Fernando, and a few other officials on duty, decided to get down a few bulldozers and retain them at the sluice and spillway sites, to breach the dam at these points if the need arises. The idea behind it was, if the predicted overnight rainfall occurs and the anticipated inflow to Parakrama Samudra do really eventuates, then an artificially introduced breach of the dam at one of these particular outlets would enhance the draining of the floods along the already existing channels, rather than a haphazard catastrophic flood damage occurring at an unwanted point over the downstream townships. In doing so, the ‘flood operation team’ would be somewhat controlling the flood with the minimising of damage to life and property, but the IE would be facing the danger of not being able to continue with the water issues to about 18,000 acres of paddy cultivation which was halfway in the Maha Season. Because of this artificial breaching of the dam, no water would be retained in the reservoir as it would turn out to be completely empty. As such, it could result in crop failure of a vast acreage, in which case, it would definitely be a big political issue. The farmers who have invested their money on land preparation, seed-paddy, weedicides and pesticides etc. would end-up desperately without any income, possibly creating farmer unrest in the area.

As such, the flood operators were very reluctant to go with the breaching option, unless they were compelled to go ahead with it. Yet another unknown factor was, how much of the predicted rainfall would occur overnight in the already wet 28 square-mile catchment of Parakrama Samudra, in addition to whatever the inflows that were coming through Amban Ganga. So, after many deliberations that night, the ‘flood operation team’ decided to stay overnight leaving all sluice and spillway gates open, anticipating the predicted rain to fall over the catchment.

At dawn the following morning, a totally unexpected phenomenon was evident. Even though, the reservoir water levels did not overtop the bund and were under control, the anticipated overnight rainfall had not really eventuated in the catchment, and because of the continuous opening of sluice and spillway gates overnight, the water levels had come down drastically, causing ‘slip circle failures’ in the dam at many places along the entire stretch of the dam. 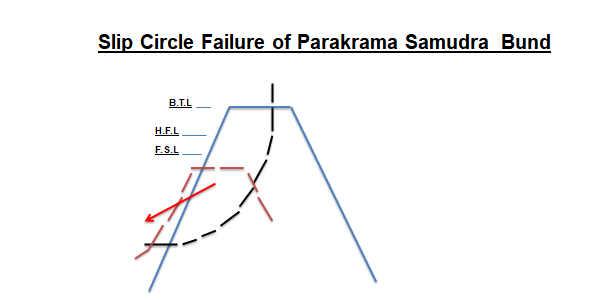 Even though there was a 12 feet wide roadway at the crest of the dam, a fair portion of the dam’s cross section had caved-in with earth slips slumping into the reservoir, leaving only about 4 feet width of the former roadway intact (Fig.2). This could be explained in engineering terms as ‘slip circle failures caused by sudden drawdown of the water table. The increased pore water pressures of the soil have caused these slips to occur’.  It was inevitable, as there were predictions for more overnight rain in the catchment which needs to be given due consideration, and there was no way of monitoring the inflows to Parakrama Samudra at that late hour of the night. This happened in Polonnaruwa, Sri Lanka in November 1978.

The Parakrama Samudra had to be restored by re-constructing the entire stretch of the damaged bund, and as a result it ended in a major exercise of dam construction. It was re-done with a much broader roadway at the dam crest, and also with big rock boulders in rip-rap to serve as the wave-breakers for the future.

In this ‘flood operation’ exercise of November 1978, all of 18,200 acres of paddy cultivation was saved, as the Parakrama Samudra Reservoir was able to issue the required water for the rest of its Maha Season. The possible disastrous breaching of the bund, luckily did not happen. It was indeed a revealing experience for all the Irrigation Engineers of the present day, who manage the ancient reservoirs built by the Sri Lankan Kings. On further reflection, one could argue had we taken the option of artificially breaching the dam bund at a sluice site or a spill site, then we would have overcome the flood dissipating problem easily with a lesser cost of dam construction, but ending up with a devastating crop failure of 18.200 acres of paddy cultivation.

The amazing part is that the 9-mile-long earth bund of Parakrama Samudra stood strong without any breaching against the force and the head of water generated by the cyclone, giving full credit to King Parakrama Bahu the Great and his men.

These were the sort of risks, problems and threats we were faced with in handling that situation with the 1978 flood event.

As per the drawing (given in Fig. 3) provided by the Irrigation Department, Colombo, and if they are to construct the 8 ft wide jogging strip, then one would notice a few problems that could be anticipated.

One case that comes to my mind is how late Mr. R. Premadasa (then Prime Minister and the Minister of Local Government) around 1985/86 period, installed a Pumping Station on top of the old Kantale Bund to provide drinking water to the nearby Town. Then, after operating the huge pumps for some time, the Bund failed due to the vibrations of continuous pumping that were carried out. But in the case of the Jogging Strip at Parakrama Samudraya, one could expect minimal vibrations taking place.

Another view that they point out is at the Tissa Wewa in Tissamaharama, a Jogging Strip had been done in around 2014 which has not caused much problems. At Tissa Wewa, the road is just by the side of the lake with a small bund height of about 15 ft. But in the case of Parakrama Samudra, the Tank Bund is much higher and it is a completely different scenario.

One more important aspect to discuss, is the non-existence of the Rip-Rap with the new construction. They say that they are going to roll the big rock boulders down. Actually, the big rock boulders or the Rip-Rap is there to break the waves that are being formed when the reservoir is operating with water levels above the High Flood Level (H.F.L).  The Full Supply Level (F.S.L) generally corresponds to the Full Operating Capacity of the Reservoir. During a special situation, where a flood happens to come up while the water level is remaining at F.S.L., the radial gates would be open. At the point when this flood passes through the spillway system with all its gates open, then the extra lift of the water level of the reservoir is called the ‘Flood Lift’. In Sri Lankan reservoirs, the ‘Flood Lift’ is generally calculated for a flood event of 1 in 100-year frequency. This ‘Flood Lift’ is the basis to decide on the H.F.L. of the reservoir. The difference of the H.F.L. and the Bund Top Level (B.T.L) is being referred to as the ‘Free Board’ which accounts for the waves that are being generated at the surface of the reservoir. The Rip-Rap which consists of the big boulders is there to break the waves, and it has to be placed between the H.F.L and B.T.L of the reservoir. So, if they are going to roll down the big boulders below the H.F.L with the new construction,  the purpose would be lost, and if a flood event like the one in 1978 comes up again, there would be less defense mechanism for wave-breaking, which could be awful.

Therefore, I do not think that it is advisable to do any sort of alterations, or trampling or disturbing to the good old bund.

Back to the Newsletter front page